What a day! I got next to no sleep last night and it is finally hitting me… hard! But, it didn’t stop us from having a great day!

We started off with a visit from our friends- Ms Carmen, Carley and and Sammi. They were in the area and stopped by to say hi. We invited them to come with us to a party- a first annual End of the School Year Party for our subdivision. We were really looking forward to it, and it turned out to be way bigger than I was expecting! Our sub is going up so fast that it feels like there are new kids moving in everyday! We met new neighbors, had hotdogs and lemonade and popsicles and brownies and fruit, played with water balloons, jumped in the bounce house, and just ran around like a bunch of crazy three year olds! We were having a great time until you both were gathered around a water table playing with toy sharks. A little boy walked up with a water gun and squirted you guys. He was probably only two or so, he didn’t know any better… he was just watching the big kids have a water gun fight and thought it was fun. Well, Molly- you didn’t think it was so much fun. Despite the fact that you were wearing a bathing suit, you weren’t enjoying getting splashed/squirted. I didn’t really blame you; it was kind of frustrating. After getting visibly irritated a few times, you finally had at him!

I could tell you were getting mad at him, but I wanted to see you you would react on your own. I watched as you backed away from him each time he would splash you. I watched the few dirty looks you gave him. You were being pretty tolerant, which I thought that was good. But, enough was enough and you finally stood up for you and your sister. When I watched as you told, well more like demanded, this little boy stop squirting you with the water gun, it actually made me smile. I like that you have the courage to stand up for yourself, I love that you aren’t afraid of boys or other children your age, and I was proud that you used your words to communicate how you felt. Granted, you probably didn’t have to be so loud or have such an attitude (which we will continue to work on)… but, I now know that the chances of you being bullied in school is slim to none. I’m not sure what’s happening, but your attitude… your attitude and sassiness is growing by the minute! You have such a strong personality that I can’t help but to laugh sometimes- the looks on your face, the hands on your hips, the way you know exactly what you want and don’t want- I don’t even know what to say half the time. I just love seeing your personalities develop, I am intrigued at how different your personalities are, and I just have so much FUN with you! But, we have to make sure to nip the bossy thing in the butt!

After the party, we went home to pick up the house. We ended up ordering pizza for dinner and eating outside on our new patio. I love being able to eat outside now! When we finished, Daddy was still cutting the grass, so I offered to take you guys to the park until bedtime. Of course, you JUMPED at the opportunity!! We went to local elementary school and had a blast playing make believe bus drivers, doctors, dinosaurs and sharks on the playground! 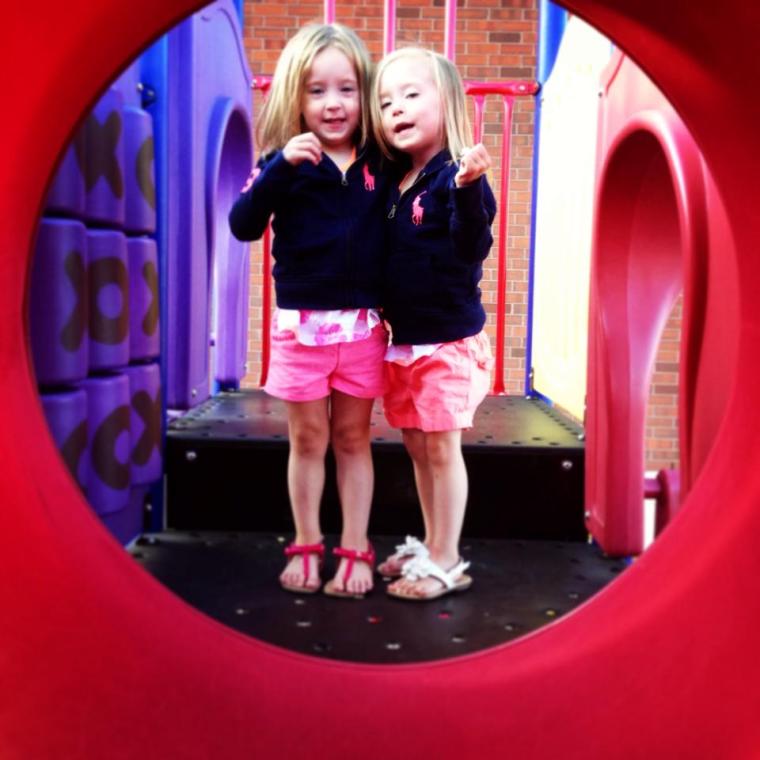 And guess what?! Gaga surprised you and met you there! It was a lot of fun! Except when, on the drive home, you realized Gaga was not coming to our house and you so-dramatically bawled your eyes out the entire way home! Like, SO dramatically! Geez. We’ll see her tomorrow, I promise… 🙂 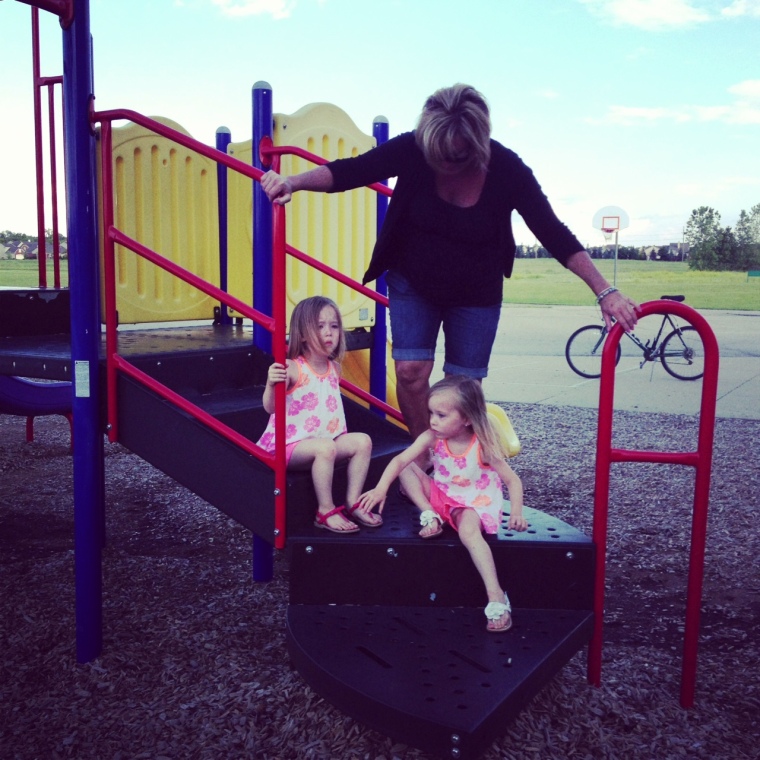 Our busy day certainly tired you out. You literally fell asleep within two minutes of hitting your sheets tonight! Tomorrow, we plan on going to Aunt Mimi’s softball tournament, getting in a few hours at the pool, and getting/making Dad’s Father’s Day Gift! And lot’s of fun planned for the weekend! Can’t wait!

Alright, I’m calling this a day! Good night, girlies! Love you! SO MUCH!