Oh, you guys never cease to make me laugh! A few hours ago, I was in the kitchen finishing up making dinner. Rather than eat what I was making, Molly, you insisted on leftover spaghetti. That was fine. So, I got it out and warmed it up in the microwave. Maddy, you decided you wanted tonight’s dinner.
So, as I am stirring over the stove, I noticed something going on. Molly, you were watching me as you ate. Every minute or so, you would look up from your plate and watch me as you chewed up your food. And do you know what Maddy was doing? Every time you looked up, Maddy would swipe your fork, take a big bite off your plate, and put the fork back down like nothing had happened. I watched her do it like 4 times.
Now, let me preface this by saying you were really crabby. You had fallen asleep in the car on the way home and when I woke you up, you were mad. Like super mad. So, I knew if you were to catch Maddy eating your food, you would freak out. Perhaps some mothers would have stopped the situation before it escalated. Maybe that would have been the good thing to do. However, I decided to grab my phone instead to snap a photo of your reaction when you inevitably busted Maddy. And low and behold, you busted her next sneak attack red handed. And it was hilarious. You momentarily looked completely shocked, as you figured out what was happening. Then, you became furious. You screamed at Maddy, “that’s NO NICE!!” repeatedly in a seriously bossy voice. But, Maddy, you didn’t seem too phased. Oh, the problems with having a twin! 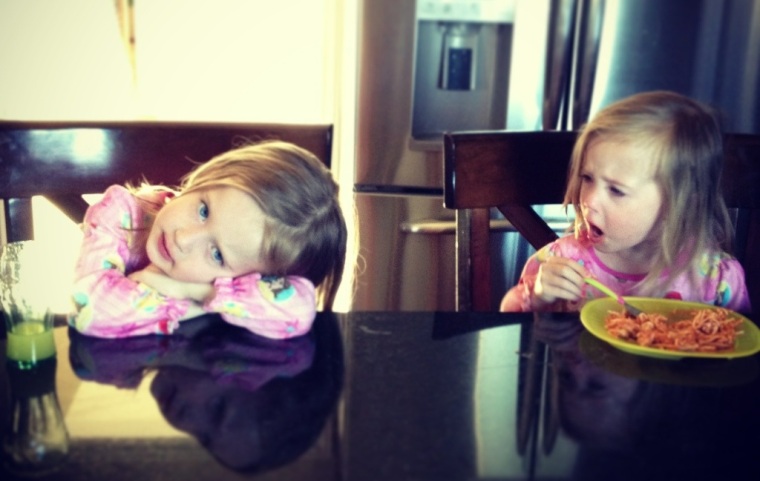 Oh, and shortly after you were caught, Maddy- you decided you wanted leftover spaghetti for dinner, too.

Maybe I’m mean, but guys are so entertaining. Haha… I love you!